Sixth podium of the season for Oncu! A brilliant fifth place for Montella 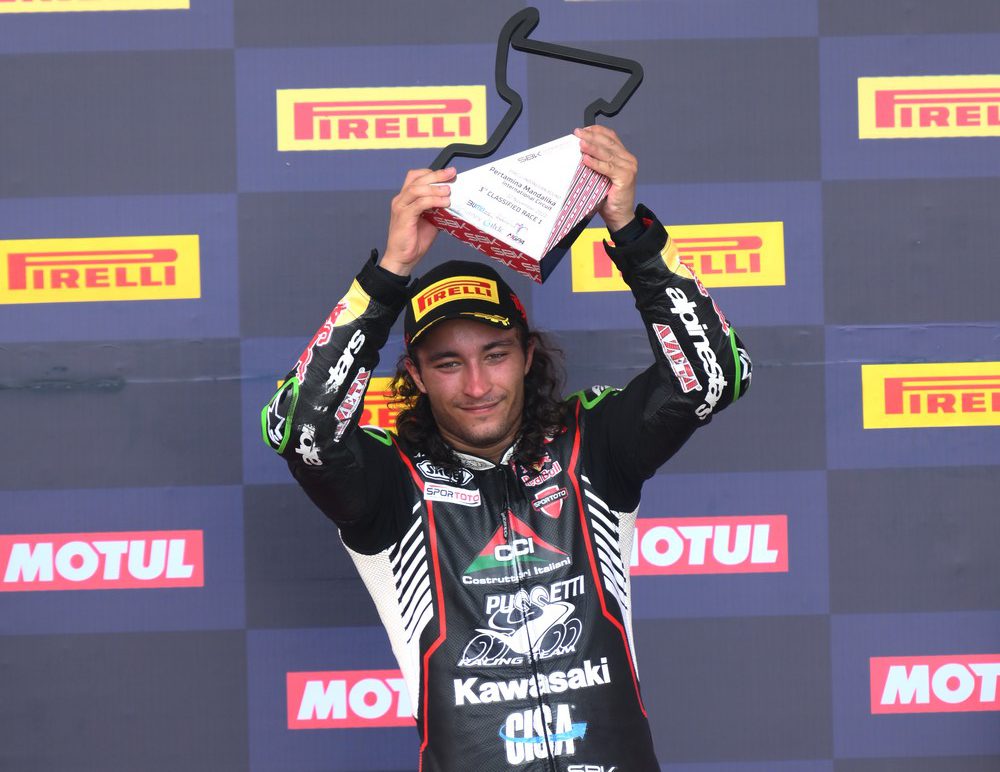 The second day making up round eleven of the Supersport World Championship played out today at the Pertamina Mandalika International Street Circuit on Lombok in Indonesia.

Yesterday, Yari Montella and Can Oncu took part in the two free practices, in which the Italian classified fourth (1’38”295) and the Turk tenth (1’39”321). Despite the precarious track conditions, the asphalt not offering the necessary grip, the Kawasaki Puccetti Racing riders looked comfortable on the Indonesian track, and well able to exploit the potential of the Ninja ZX-6R.

The Superpole session, valid for establishing grid positions for the weekend’s races, ran in hot and humid conditions this morning. Putting in a very strong performance, Can Oncu (1’36”000) scored second place and, hence, a spot on the front row. Yari Montella also did very well, closing sixth with a time of 1’36”263, which meant a second row start for the afternoon’s19-lap race.

Oncu and Montella made a solid start, which saw both move up into the leading group, the Turk lying fourth and the Italian sixth. During the course of lap three, Can took the lead, while Yari remained sixth. At around the mid-race point, Oncu was in second, a consistent frontrunner, while Montella formed part of those chasing, in fourth. In the final stages, the Turkish rider was slowed by a drop in tyre performance, but he nevertheless crossed the line third to score his sixth podium of the season, the ninth of his career! Montella just missed out on fourth place by a few thousandths of a second, concluding the race fifth.

In the championship standings, Oncu lies third with 232 points. Montella is eighth with 125 points.

Tomorrow the two Kawasaki Puccetti Racing riders will be back out for the second and final race of this eleventh WorldSSP round.

In Superbike, Kawasaki Puccetti Racing rider Lucas Mahias suffered a crash in this morning’s FP3 and sustained injury to the ligaments in his right ankle. He was therefore stopped from riding by the doctors, and was unable to compete aboard his Kawasaki today. The French rider will undergo another check-up tomorrow morning, to understand whether he can take part in the weekend’s last two races.

“I think we are improving every time and I am proud of my team. I tried my best but made a small mistake on the back straight with a near-highside, so I did not want any more risks. I tried to finish second after that but in the end I had another slide and Caricasulo passed me. I could not do better but it was a good podium. Our dream is, of course, to finish in first position, so let’s target it, hope for it and try to do it.”

“I ran a good race, but perhaps we could have done a little more. I perhaps made a mistake in managing the initial phase, and lost contact with the leaders. From then on, it was an uphill climb but in the end I brought home a solid fifth place, just missing out on fourth. We need to continue like this because we’ve again shown that we have the potential to reach the podium, so that’s my goal for tomorrow’s race.”