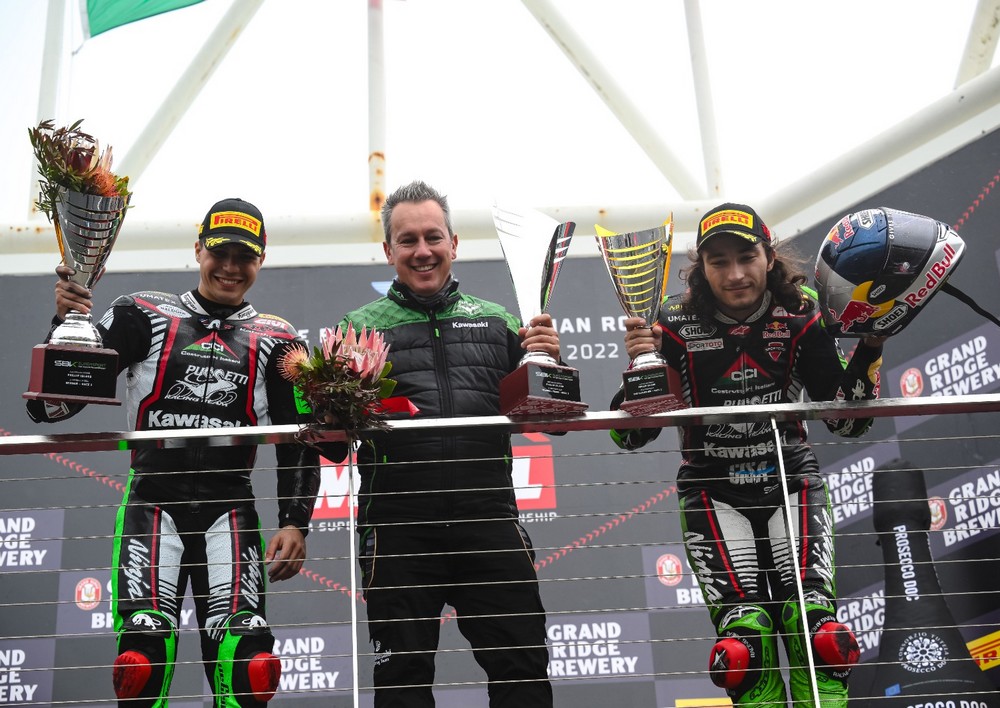 Day two of the twelfth and final Supersport World Championship played out today at the Phillip Island Grand Prix Circuit in Australia.

Yesterday, Kawasaki Puccetti Racing riders Yari Montella and Can Oncu worked hard with their technicians to adapt their riding style and bikes to the Australian track. The Italian rounded out the day in fourth place with a 1’34”532, while the Turk followed close behind in sixth, thanks to a fastest time of 1’34”673.

The Superpole session that established the grid for the subsequent race ran on a wet track, after rain fell shortly before the start. Yari Montella put in an excellent performance, stopping the clock on 1’37”314 in the final stages to earn a front row start, third, on the grid. Can Oncu set a 1’38”018 that was enough to secure eighth place. The Turkish rider therefore lined up on row three for a race that ran in the rain in the early afternoon. Both riders made a very strong start and by the end of lap one Montella was lying second, immediately ahead of his team-mate. At the start of lap four, Yari moved into the lead with Can placing third. The Italian and another rider broke away from the rest of the group and battled it out for the win all the way to the last lap, when Montella’s rival crashed in his efforts to keep pace, leaving Yari to cross the line first and win his first ever Supersport race! Can Oncu also ran a strong race to finish third, rounding out a very successful day for Kawasaki Puccetti Racing!

Oncu has now mathematically secured third place in the championship standings, and holds 264 points, while Montella moves into seventh place with 160.

Tomorrow will see the Kawasaki Puccetti Racing riders back out for the very last race of the 2022 WorldSSP season.

“An historic day for our team, with a fantastic win for Montella and an excellent performance from Oncu who has mathematically secured third in the general standings. An incredible win in a race that was made difficult by the track conditions, and so it’s thanks to the entire team, as well as Yari, as they have all worked so hard and deserve to be individually named. A victory and a podium that we dedicate to all our sponsors, with special thanks to Kawasaki, which has once again proved very competitive and for maestro Kenan Sofuoglu, who is extremely committed to helping his young riders grow”.

“I would maybe have been fourth today but Caricasulo crashed on the last lap so I got third place. This is racing. I am very happy of course to be on the podium even though the wet race package we had today was not so good. We have to be really proud because this year we did so many podiums compared to last year, so I think I have improved myself so much”.

“I ran a great race. I started not knowing what to expect in the wet conditions, but I quickly found feeling with the bike and track. Once I got into the lead, I battled to stay there, also because your visor would get dirty if you followed behind someone else. I put my rival under pressure and he crashed. We needed this win, which confirms our great progress. We were already strong in previous races, but now I feel in total control of the bike. I dedicate this win to my family and my team. We’ve worked and suffered together, and we deserve it!”