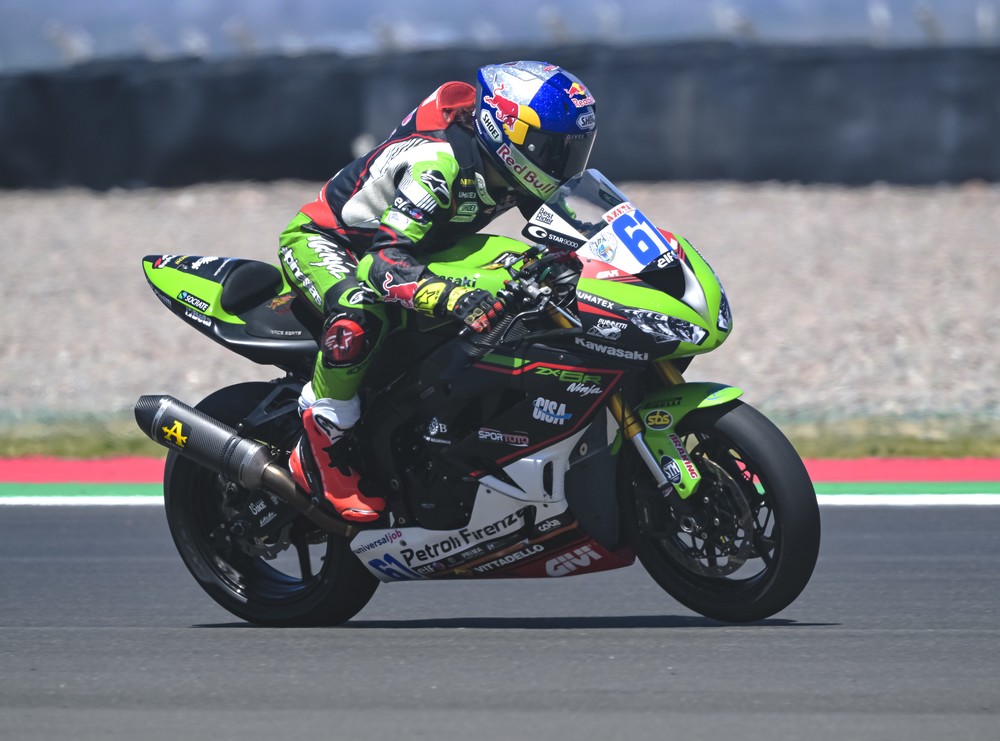 The tenth round of the Supersport World Championship continued today with Superpole and Race 1 at the San Juan Villicum in Argentina. Kawasaki Puccetti Racing riders Can Oncu and Yari Montella had very different experiences yesterday. The Turk immediately proved competitive at this track, finishing free practice in fourth place, while Montella, who is competing at the circuit for the first time, concluded the sessions in sixteenth position.

Both were back out this morning for Superpole, which established the grid positions for the two races. It was an unlucky session for Oncu, who crashed in the final stages of the session and was unable to continue. With a time of 1’42”126, the Turkish rider qualified fourteenth, followed by Montella (1’42”541), sixteenth. Results that meant that Oncu started from the fifth row and Montella from the sixth for the afternoon’s race, which ran in sunny conditions.

The two riders made a strong start, immediately making up some positions. Through the first laps, Oncu was ninth just ahead of team-mate Montella. The pair continued to make up ground and by mid-race, the Turk was already up into fifth place while the Italian was in ninth. With very strong race pace, Can crossed the line fourth and Yari eighth.

In the championship standings Oncu is third with 207 points while Montella places seventh with 114.

Tomorrow will see the riders back out on track for the second and final race of this tenth WorldSSP round.

“A race conditioned by my starting position. I got away well and pushed to the max from start to finish, remaining focused, which allowed me to make up twelve positions. By the team I got to the front of my group, the front three were unreachable and so I had to settle for fourth place. We’ll try again tomorrow. Thanks to my technicians for providing me with such a competitive bike.”

“It was a good race. Unfortunately, I wasn’t able to exploit my laps in Superpole and so had to start from further back. I made a strong start to the race and made up many places. For tomorrow we’ll improve something on the bike but the important thing will be to give it our all and score a good result. I want to thank my team as they’ve done an amazing job on my bike.”