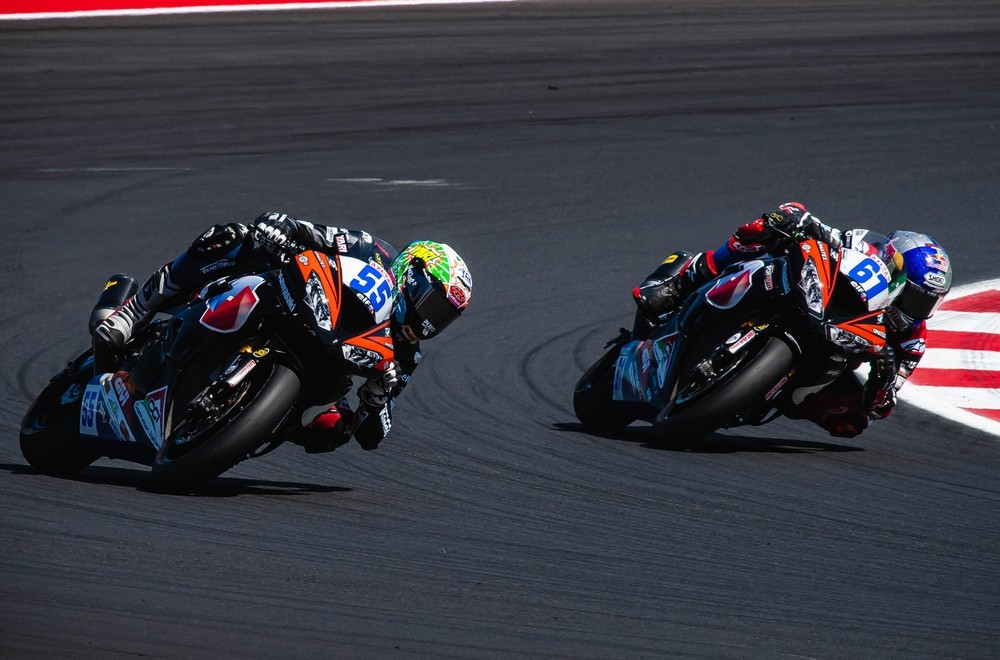 The fourth Supersport World Championship round has concluded today at the Misano World Circuit. It was a home round for Manuel Puccetti’s team, an excellent opportunity for them to meet with sponsors and supporters and race in front of their fans. In addition, all the Kawasaki Puccetti Racing have flaunted the historic ELF livery this weekend, confirming the long-lasting and very fruitful partnership with Total Italia.

Yesterday saw Can Oncu and Yari Montella compete in the Superpole and the first of the weekend’s races. In Superpole, the Italian scored fifth place, while the young Turk finished seventh. In the race, Oncu crossed the line fourth, followed by Montella in sixth.

In the late morning, in hot and sunny conditions, the two riders were back out on the Italian track for the second and final race of the weekend. Like yesterday, Montella lined up on the second row of the grid and Oncu from the third.

Montella made a very fast start and was straight up into second position, with Oncu fifth. At around the mid-race point, the Italian and Turk were still part of the leading group, lying fourth and fifth respectively. Over the subsequent laps, the Kawasaki Puccetti Racing riders lost contact with the leaders and battled it out between themselves for fifth place. Oncu won the ‘derby’, crossing the line fifth with Montella finishing in seventh place.

In the championship standings, Oncu lies fourth with 80 points, while Montella follows him, sixth with 62 points.

The next Supersport World Championship will take place at Donington Park in the UK, over the weekend of 15-17 July.

“Nothing is ever easy of course, and we really did our best today. We are strong and our team never gives up, I never give up, so I am happy about that. We will get better and better at every race. I have never ridden at Donington before, and I think that might actually be a positive. We have one month off now, but I’m not happy about that because it means we have to wait a month before I can be back on the podium.”

“Although we’re not happy with the race result, today was a positive day. It was a difficult race, but we definitely took a step forward compared to yesterday. We started strong and were part of the leading group for a good while, and only a drop in front tyre performance prevented me from fighting for the podium all the way to the end. We’re improving, but we need to continue to work and focus, and I’m sure that the team and I will do just that.”