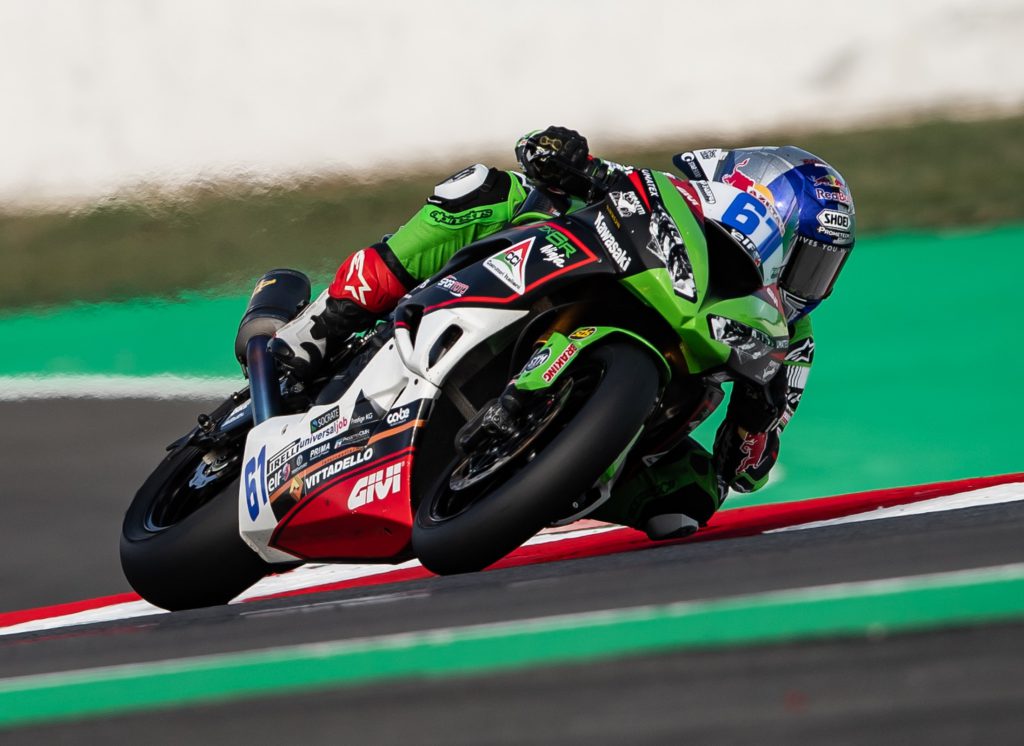 Day two of action making up round seven of the WorldSSP has played out at the Nevers Magny Cours circuit in France. Despite rain complicating yesterday’s proceedings, Kawasaki Puccetti Racing riders Can Oncu and Yari Montella completed two free practice sessions, placing eleventh and fifteenth respectively.

Both returned to the track this morning for Superpole. In cloudy conditions, but on a dry track, Oncu set the seventh fastest time (1’41”190), while Montella finished fourteenth (1’41”529).

With these results, the Turk got away from the third row of the grid and the Italian from the fifth in the weekend’s first race.

Oncu made a strong start to position in the leading group. Montella also got away very well and moved into ninth place. In the space of a few laps, Yari had caught the leading group, while Can oscillated between first and third place. As the race went on, the two Kawasaki Puccetti Racing riders lost contact with the leading trio, before the race was brought to a halt with a red flag on lap thirteen, after another rider crashed, his bike left on the track. This prevented Oncu and Montella from catching the frontrunners, with the Turkish rider therefore finishing fourth, immediately ahead of his team-mate.

In the championship standings, Oncu lies fourth with 125 points, while Montella is seventh with 86. Tomorrow will see the Kawasaki Puccetti Racing riders compete in the second and final WorldSSP race of this seventh round.

“The red flag prevented me from pushing to catch the leaders and battle for the podium. I’m not pleased with the result, but at least we’ve shown that we’re competitive and can fight for the win. We have the potential to do well, and I hope we can demonstrate that already in tomorrow’s race. Thanks to my team, they’ve done a great job.”

“Considering my grid position, fifth place is a good result. I wasn’t able to make a clean lap in Superpole and so had to start from the fifth row. I knew I had good pace and so was very focused as the race started. I pushed to the max without making any mistakes and, in the end, I finished fifth. For tomorrow, we’ll make a few changes to the bike, but we’re basically ready and will be aiming for a top result. I want to thank the team as they’ve been a big help.”