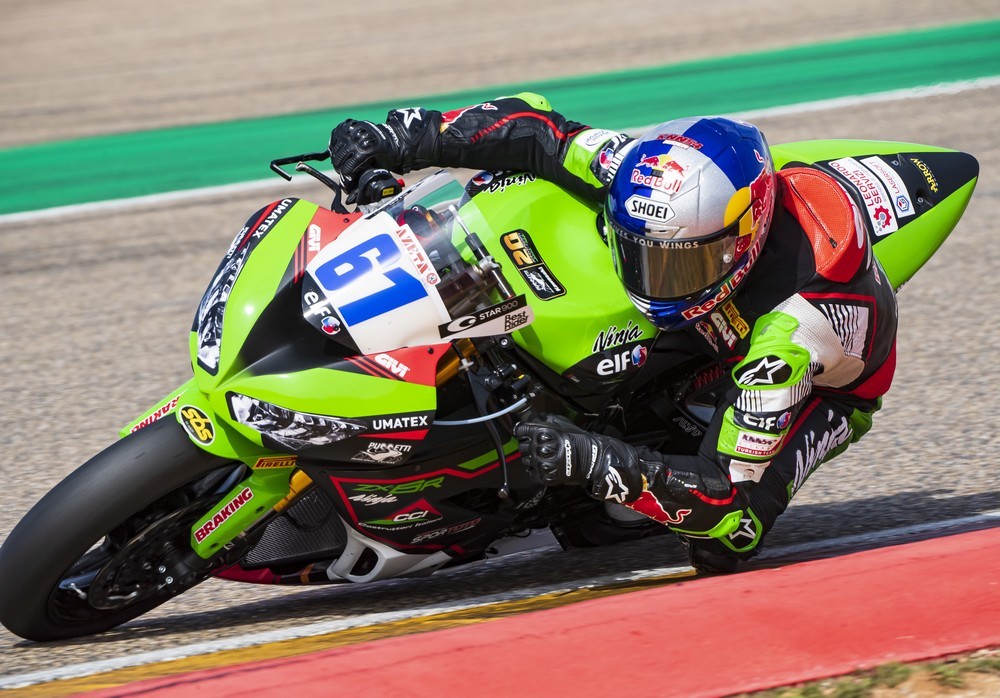 Kawasaki Puccetti Racing has done an excellent job during the two official test days that concluded today at the Motorland Aragón circuit in Spain. This was a first opportunity for all riders in the Supersport World Championship category to get a feel for their competition, in a series that has seen a significant regulation change that now allows for the participation of new bikes with different engine sizes.

Conditions were sunny but very cold over both days, which made things difficult for the riders and their technicians.

Manuel Puccetti’s riders nevertheless proved to be at the sharp end of the category and, while this comes as welcome confirmation for Can Oncu, it is a happy surprise to see Yari Montella already so close to the top of the timesheets at the end of the Spanish sessions.

By the end of day one, Oncu had set the third fastest time, a 1’53”994, to finish less than two tenths from first. Montella also did very well and, despite the fact he is still getting to grips with the Kawasaki Puccetti Racing Ninja ZX-6R, he was able to set a 1’55”126 that saw him place ninth.

Both riders were able to improve on those references during today’s sessions. The young Turk stopped the clock on 1’53”542 and retained third place overall in the combined test classification. Montella made significant progress, climbing to sixth overall thanks to a best lap of 1’54”088.

The team and riders can now rest up for two days, before they return to the Aragon track on Friday 8 April for the opening round of the Supersport World Championship.

The full weekend schedule is available at this link:

Can Oncu: “I’ve felt really good on my bike during these tests, and it’s all been very positive. We were consistently fast and today I could have set a better time if I hadn’t been hindered by another rider during my flying lap. But beyond the result, we know we have great potential, and this means that I feel relaxed and optimistic, not only ahead of the first round but the whole season. Thanks to my team as they’ve done a great job as ever.”

Yari Montella: “Two very important days. We’ve worked very well, although the morning sessions were really cold. I’m constantly learning more about how to exploit the potential of my bike, also thanks to my technicians’ great work, as they now know how to adapt it to my riding style. I’m still lacking something in terms of both my race pace and over the flying lap, but we’re in a good position and have significant room for improvement. During Friday’s practice sessions, we’ll continue with the work begun this week. As for the first round, I’d say I’m optimistic, because I like the track and have always been fast here.”