Last European round of 2022 at Portimão for Kawasaki Puccetti Racing 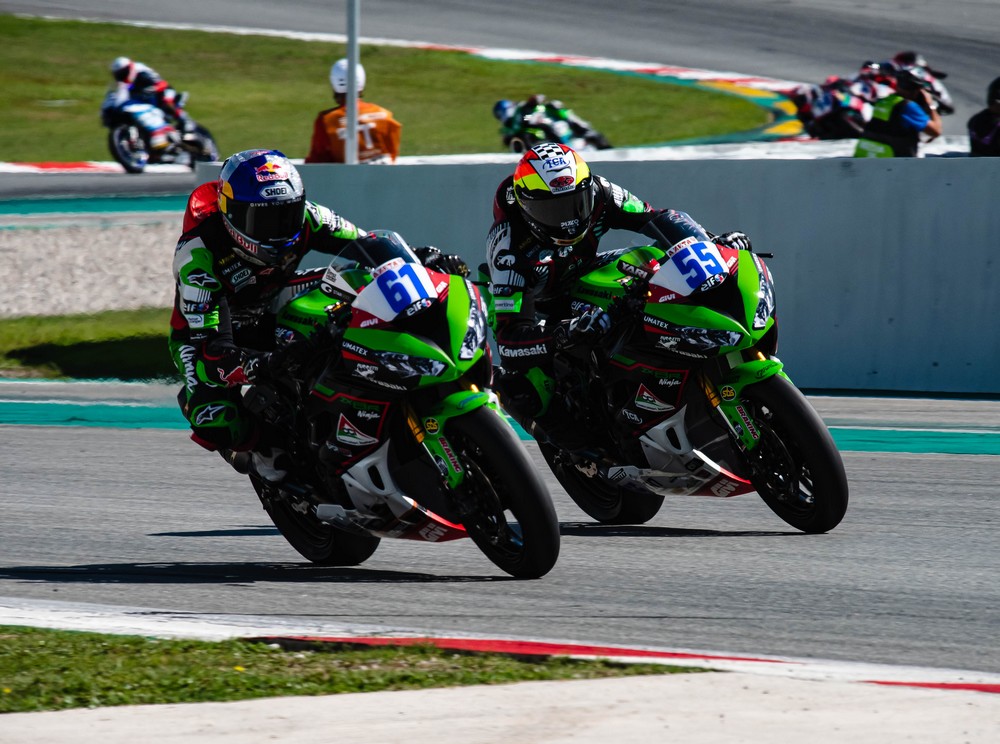 The WorldSBK and WorldSSP rounds come thick and fast for Kawasaki Puccetti Racing and now, less than two weeks after positive races at Barcelona, Manuel Puccetti’s team is in Portugal for round nine of the production-derived world championships.

In Spain, Can Oncu reached the Supersport podium twice, after finishing third in race 1 and second in race 2, and has now moved into third place in the general standings. It was a complicated weekend for Yari Montella who, despite running two great races, was unable to achieve the kind of results he deserved. In Superbike, Lucas Mahias suffered from some electronics problems but was nevertheless able to finish top ten in the races.

In Portugal, Oncu and Mahias want to confirm the Barcelona results, while Montella seeks to score what would be his first podium of the season.

Kawasaki Puccetti Racing has enjoyed significant success at the Autodromo do Algarve in the past, in both Supersport and Superbike. After finishing second in 2015, Kenan Sofuoglu went on to win the race in 2017. In 2019 and 2020, the three-time world champion finished third and second. Again in Supersport, Lucas Mahias placed third in 2019 and second in 2020. And the team reached the Superbike podium with Toprak Razgatliuoglu in 2019, the rider crossing the line third in race 2 with the Puccetti Ninja.

The Autodromo Internacional do Algarve is located just a few miles from Portimão in southern Portugal. The circuit was inaugurated in 2008, when it hosted the Superbike and Supersport championships for the first time. The undulating track that requires incredible braking is 4592 metres long and comprises fifteen turns, nine right-handers and six left. Pole position is to the left.

The full schedule for the Portuguese round is available at this link:

Lucas Mahias: “This will be my first visit to Portimão with a Superbike, because injury stopped me from competing last year. It’s a very technical and enjoyable track, and I’ve scored some great results there in Supersport. It will all be different in Superbike of course, but I hope to quickly find a good setup for my Ninja so I can aim for the top ten in all three races.”

Can Oncu: “Although I’ve never scored great results there, I really like the Portimão track. On the back of the Barcelona results, I want to prove I’m a frontrunner in Supersport. I’ll be aiming for the podium, as always, and think I have what I need to be able to achieve that again in Portugal.”

Yari Montella: “I can’t wait to get back on my Kawasaki. The recent Barcelona weekend was short on results in my case, but we still showed that we can be very competitive. At Portimão we’ll work on those aspects we can improve, both in terms of my riding and the bike setup. I’m highly motivated and know and love the track, so I really hope we can run two good races.”