Kawasaki Puccetti Racing flies to Australia for the final round and announces that Can Oncu is reconfirmed for 2023. 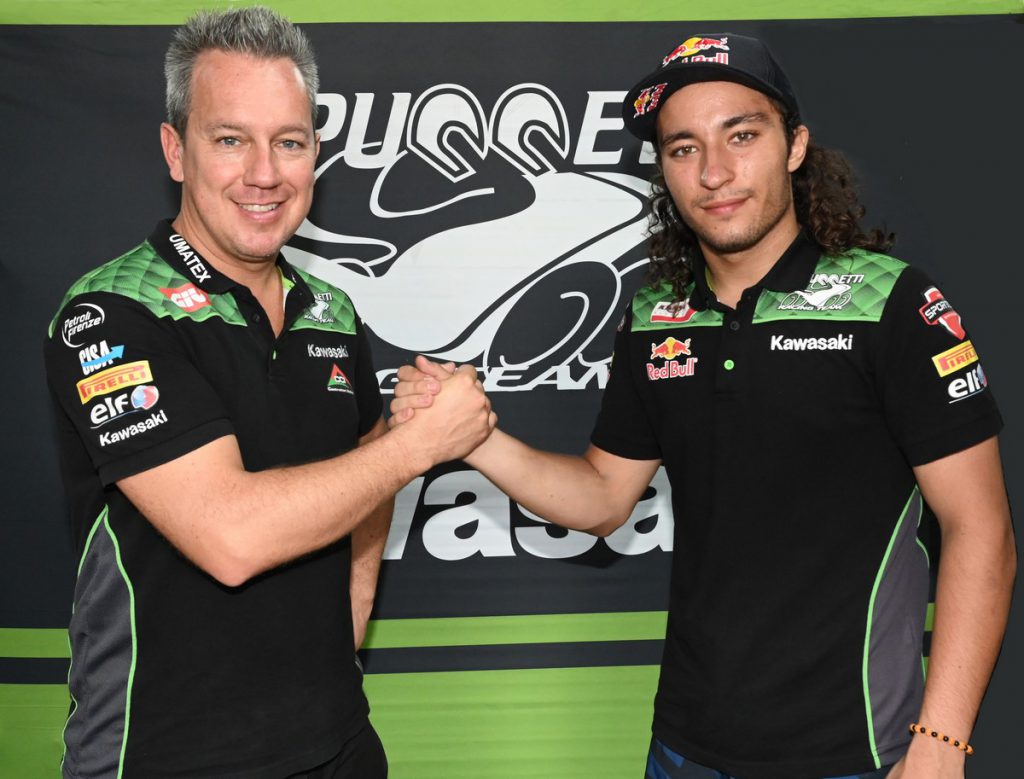 Just a few days after the conclusion of the Mandalika WorldSBK round, Kawasaki Puccetti Racing travels on to Australia, and the beautiful Phillip Island circuit, where the Superbike and Supersport World Championship finale will play out this weekend.

The previous event on Lombok was undoubtedly positive for the two WorldSSP riders Yari Montella and Can Oncu, the latter reaching the podium in both races. The Turkish rider continues to mature and grow as a rider, and Manuel Puccetti is proud to confirm that Can will remain part of the team again next season. The ultimate goal of the project is to have Oncu debut in WorldSBK in coming season but in the immediate future, the team and rider will focus on securing the 2023 Supersport title, bolstered by the results and experience that young Oncu (just 19) has gained during the current season and will continue to gain, all being well, during the final championship round.

In Superbike, Lucas Mahias hopes to be fully recovered after an injury to ligaments in his right ankle forced him to miss the three Indonesian races, and he will undoubtedly give it his all as he tries to round out the 2022 season in the best possible way.

The Phillip Island circuit is located in Australia, close to Ventnor in the state of Victoria. It was constructed in 1956 and has hosted MotoGP races since 1997, while the Superbike and Supersport series have been regular visitors since 1990. It is undeniably one of the world’s most beautiful racetracks, challenging and technical, with the ocean serving as a spectacular backdrop. The track is 4.445 km long with twelve turns, five of which right-handers and seven left. Pole position is to the left.

The full schedule for the Australian round is available at this link:

Manuel Puccetti: “We have a five-year contract with Can, to allow him to grow as we did in the past with Toprak Razgatlioglu, all under the supervision of Kenan Sofuoglu, who manages these riders with the attention of a second father and the professionalism and attention  to details of a manager. So I’m pleased to be able to continue this collaboration, which I’m sure will be very fruitful for both parties. This year Oncu is likely to round out the championship with a well-deserved third place, and with results that continue to improve. This is clearly important for a rider who is just 19 years of age. Kawasaki also supports our project, our short-term goal being to win the Supersport title, while long-term plans involve helping Can to become a frontrunner in WorldSBK.”

Can Oncu: “I’ve scored a lot of podiums this year and this means I’m highly motivated and optimistic ahead of next year, when I’d like to aim for the Supersport title. None of this would be possible if I weren’t part of Manuel Puccetti’s team; he’s like a big brother to me. I’m proud to continue as part of this team and want to do even more in terms of results as of 2023. I know I need to win races and score many podiums to win the title, but this is my dream and my goal. I’m pleased to continue working with all the team’s technicians as I get on really well with them all and hope to ultimately be able to repay them with a world title.”

Yari Montella: “I have good memories of the Phillip Island, a track I raced at a few years ago in Moto3. It’s a difficult but fun and fast track, with a wonderful backdrop. We made further progress at Mandalika and proved to be just a step from the kind of results we set out to achieve. We hope to take that final step forward; I’d really like to round out the season with a podium.”

Lucas Mahias: “It was really frustrating not to be able to race at Mandalika, but it was for the best as I wasn’t in great shape following Friday’s crash. I hope to be in top shape in Australia, because I really like the track and although I’ve not raced there with a Superbike, I’ll do all I can to score good result. I want to finish the 2022 season on a high.”